The Ultimate Training Guide: Everything You Always Wanted To Know About Advanced Training For Stand-Up Fighters!

TAP INTO THE MIND OF A PROFESSIONAL MMA TRAINER

Robert “Bob”Perez has almost three decades of combative sports experience. He is the head striking coach at 4 oz .Fight Club and has trained over twenty champions.

Originally schooled under Kru Pong of Thailand, Bob is especially skilled at adapting Muay Thai and other striking techniques for use in MMA contexts.

After years of perfecting his training methods, Bob has put together a long list of his favorite training methods that he personally uses to train fighters to reach the highest levels.

Known for his aggressive style of training, Bob is quickly becoming regarded as one of the best striking coaches in MMA. Robert has been selected as Texas MMA trainer of the year on multiple occasions, and has been recognized as Kru by the Sports Authority of Thailand. 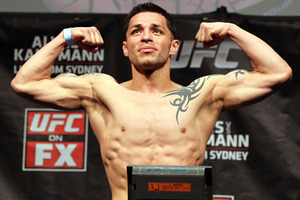 Bob has trained fighters that have appeared in such promotions as Dream, Bellator, Strikeforce, and The UFC. Many of these fighters, Bob has brought up “from the beginning” and taken them all the way through up to these top promotional events. In this video, Bob has taken what he calls his personal training “Bible” that he has compiled over the years, and committed it to video. Favorite drills, techniques, and training methods, the same methods he uses to train fighters to reach high level performance, he is now offering you in this unique video.

Outside of training fighters, Bob is also a columnist for Tapout Magazine, and has been published in MMA Worldwide. He aspires to keep growing as a coach,and share his knowledge with all that wish to learn.

ROBERT PEREZ HAS NOW TURNED HIS PERSONAL TRAINING “BIBLE” INTO A VIDEO FOR ALL TO LEARN:

Here is a rundown of just some of the material included in this course. You get all of this and more in this 4 DVD set:

“GET A PROVEN METHOD OF TRAINING”

DETAILED AND EASY TO FOLLOW INSTRUCTION JAM PACKED WITH INFORMATION!!